The Struggle in Black and Brown: African American and Mexican American Relations during the Civil Rights Era (Justice and Social Inquiry) (Paperback) 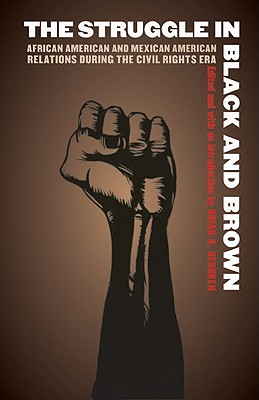 It might seem that African Americans and Mexican Americans would have common cause in matters of civil rights. This volume, which considers relations between blacks and browns during the civil rights era, carefully examines the complex and multifaceted realities that complicate such assumptions—and that revise our view of both the civil rights struggle and black-brown relations in recent history. Unique in its focus, innovative in its methods, and broad in its approach to various locales and time periods, the book provides key perspectives to understanding the development of America’s ethnic and sociopolitical landscape.
These essays focus chiefly on the Southwest, where Mexican Americans and African Americans have had a long history of civil rights activism. Among the cases the authors take up are the unification of black and Chicano civil rights and labor groups in California; divisions between Mexican Americans and African Americans generated by the War on Poverty; and cultural connections established by black and Chicano musicians during the period. Together these cases present the first truly nuanced picture of the conflict and cooperation, goodwill and animosity, unity and disunity that played a critical role in the history of both black-brown relations and the battle for civil rights. Their insights are especially timely, as black-brown relations occupy an increasingly important role in the nation’s public life.

Brian D. Behnken is an associate professor in the Department of History and the U.S. Latino/a Studies Program at Iowa State University. He is the author of Fighting Their Own Battles: Mexican Americans, African Americans, and the Struggle for Civil Rights in Texas.

"This book is a groundbreaking step in the evolution of the exciting subfield of black-brown relations. Each of the essays contains valuable lessons, and the book should be required reading for scholars of the civil rights movements and of American racial formations."—Max Krochmal, Journal of American History

"Brian D. Behnken has brought together an important group of senior and junior scholars on the making of black-brown relations to document the long history of cooperation and conflict between the two groups. Behnken's collection of essays successfully documents the many spaces of coalition and discontent between the African American civil rights and Chicano movements."—Alberto Rodriguez, Southwestern Historical Quarterly

"This volume is a fascinating and important contribution to the field."—Julie Leininger Pycior, Journal of Southern History