The First Rule of Punk (Paperback) 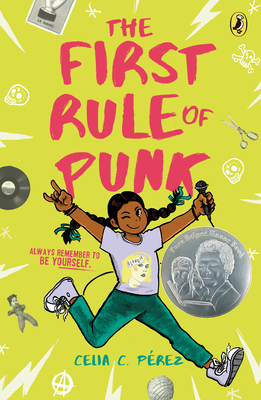 The First Rule of Punk is a wry and heartfelt exploration of friendship, finding your place, and learning to rock out like no one’s watching.

There are no shortcuts to surviving your first day at a new school—you can’t fix it with duct tape like you would your Chuck Taylors. On Day One, twelve-year-old Malú (María Luisa, if you want to annoy her) inadvertently upsets Posada Middle School’s queen bee, violates the school’s dress code with her punk rock look, and disappoints her college-professor mom in the process. Her dad, who now lives a thousand miles away, says things will get better as long as she remembers the first rule of punk: be yourself.

The real Malú loves rock music, skateboarding, zines, and Soyrizo (hold the cilantro, please). And when she assembles a group of like-minded misfits at school and starts a band, Malú finally begins to feel at home. She'll do anything to preserve this, which includes standing up to an anti-punk school administration to fight for her right to express herself!

Black and white illustrations and collage art by award-winning author Celia C. Pérez are featured throughout.

Celia C. Pérez is the author of The First Rule of Punk, a 2018 Pura Belpré Author Honor Book; Strange Birds, a 2020 Rise: A Feminist Book Project List Selection; and Tumble, which received six starred reviews and is an NPR Best Book of 2022. Celia is a longtime maker of zines inspired by her love of punk music and writing. Her favorite zine supplies are a long-arm stapler, glue sticks, and watercolor pencils. She'll never stop picking cilantro out of her food at restaurants, and she owns two sets of worry dolls because you can never have too many. Originally from Miami, Florida, Celia lives in Chicago with her family where she works as a community college librarian.

Select awards and accolades for The First Rule of Punk:

★ "A charming debut about a thoughtful, creative preteen connecting to both halves of her identity."
—Kirkus Reviews, starred review

★ "Pérez’s debut is as exuberant as its heroine... A rowdy reminder that people are at their best when they aren’t forced into neat, tidy boxes."
—Publishers Weekly, starred review

"A voice that is equal parts witty and sharp."
—Bustle.com